← more from
Les Disques Bongo Joe
Get fresh music recommendations delivered to your inbox every Friday. 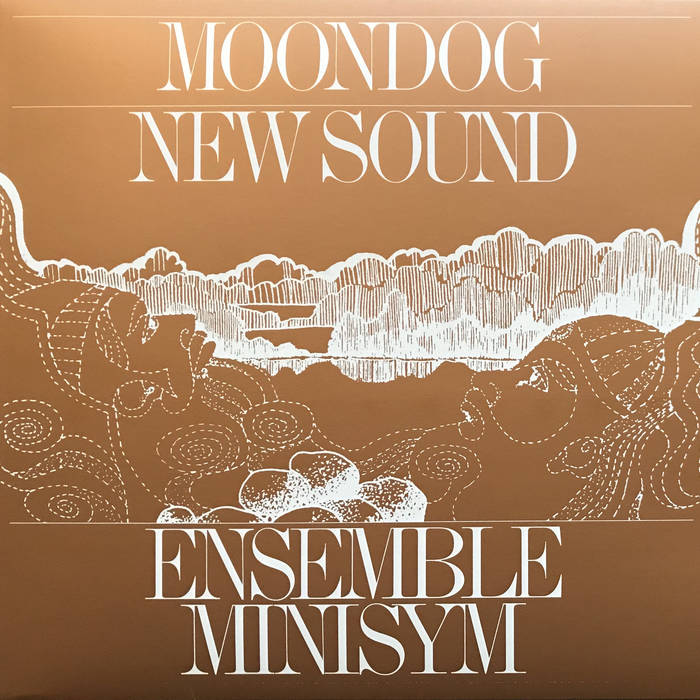 “I like to write chamber and choral music, especially for orchestra. But since it is not always easy to have orchestral works performed, the organ is the next best medium to give the composer vast tonal resources.”, Moondog wrote in 1978 in the liner notes accompanying the Selected Works album – the confidential American cousin of Moondog in Europe, the first album he recorded in Germany.

With New Sound, the Minisym Ensemble goes the opposite direction, taking the pieces for organ(s) constituting the A New Sound of an Old Instrument album (1979) – as well as pieces composed in Europe during the same period – towards a new and singular instrumentation. The Ensemble’s work is hence based on a vast knowledge of the composer’s universe, Moondog himself having – throughout his lifetime – regularly given new colors to particular compositions by changing their instrumentation. This is especially obvious with the A New Sound of an Old Instrument album whose first side comprises pieces mainly composed amidst the tumult of the streets of New York and characterized by an incredible science of interbreeding (“Oasis”, “Single Foot”), while the second side favors new compositions inspired by the European soil Moondog is now beginning to discover and will never leave (“Barn Dance”, “Elf Dance”, “Log in B”). Heading off the beaten path, Minisym’s musicians also decipher previously unreleased pieces, sometimes even never played or recorded by Moondog (“Logrundr in A”, “Ground in D minor”, “Marche Funèbre (Vercingétorix)”, “Shneeflocken”).

Far from all academicism, this is a world we encounter here, in the shade of instruments as rare as they were dear to Moondog. This record, result of a lengthy period of work, allows for a new breath as faithful as iconoclastic on the music of a composer who spent his whole life crafting a particularly naive body of work.

“The Bridge.” One of the numerous nicknames Louis Thomas Hardin took for himself during his life. Obviously, there was also Moondog. But if the latter was his stage name and the one he used to sign his compositions, “The Bridge” was his Indian name. A name that represented him, a name that highlighted one of his peculiarities…

Born in the United States in 1916 and deceased in Germany in 1999, Moondog was a bridge. A bridge between the New and the Ancient Worlds. His feet solidly planted in America and his heart undeniably closer to Europe, to such an extent that he sometimes defined himself as a “European in exile”. The uniqueness of his work will arise from this double identity, characterized by a rare and sincere mélange of the baroque music’s canons and the tribal pulsations of Native American dances. A bridge, thereby, across time: “Today is yesterday's tomorrow, which is now.” A warrior of the Great North amid the white-collar workers of Manhattan. “A beatnik before the beatniks”, and one of the first Dharma Bums. A modern-day classical composer, his minimalism and his contemporary music derived from the writing patterns of the Middle Ages and the Renaissance. He traveled all the way through the century during which he was born, leaving behind a thousand works written for dozens of instruments, from the organ to the computer. A bridge, thereby, between aesthetics. This is not really classical music, and if his compositions might borrow from classical writing in terms of melody and harmony, the rhythmic procedures are new. Not really jazz, even if the saxophone soli are rigorous, in a phrasing that can evoke improvisation, but which is in fact written in counterpoints. This is not pop, either, because every simple and naive melody hides an incredible complexity that arises from this science of interbreeding at the very heart of his work.

Moondog was eventually an architect. The architect of a unique body of work.
A work that still remains too underground and too rarely performed, probably due to the lack of a thorough work on the editing of the hundreds of scores he has left behind (some of them still being in their original braille writing), or because of his strong will not to choose between the erudite and the popular and to defy categorization. But thanks to the perseverance of a few enthusiasts, the world is now rediscovering this brilliant forerunner.

Bandcamp Daily  your guide to the world of Bandcamp

Damu The Fudgemunk shares his recent collab with Def Pressé, plus jams from Common and more